The next big energy metal

These nickel parcels are uniquely identified private property, tracked in our parcel ownership list, audited by our financial auditor and Bureau Veritas, fully insured against loss, guaranteed to be genuine, and stored under exclusive Singapore jurisdiction.

Being your property, these parcels can be sold 24/7, used as collateral for low interest peer-to-peer loans, or taken delivery of.

Any unused storage will be refunded upon sellback or delivery. The outlook for Class I nickel is one of deepening deficits, falling stocks and rising prices. The widely anticipated expansion in electric vehicle (EV) production and sales is likely to exacerbate the predicted structural shortage in nickel. Furthermore, as less than half of the nickel supply can be used for batteries, we will likely see an increasing price premium for high purity Class I over Class II nickel.

Class I nickel is trading around 27,287 USD per ton, a 51% of its 2007 high of 54,000 USD per ton. Based on our conversation with two nickel mining CEOs, it is unlikely that new Class I production will come online unless nickel prices remain over 30,000 USD per ton for a sustained period of time. The high cost and risk of converting Class II nickel to Class I means that a sustained price of 55,000 USD per ton is needed to make the process profitable.

Only high purity Class I nickel is usable for batteries

Nickel is traditionally used in steel production. Nickel prices skyrocketed to 54,000 USD per ton in 2007 when the Chinese construction boom, and steel demand, peaked. It is important to note that steel is typically alloyed with low purity Class II nickel, which is unsuitable for batteries. The construction demand surge eventually caused large amounts of cheap, low grade Class II nickel supplies to accumulate in the Philippines and Indonesia whose abundance, once the construction boom ended, caused a nickel price crash to around 10,000 USD per ton.

The low nickel prices and large Class II supply in turn made it increasingly unprofitable to operate high cost Class I nickel mines, curtailing Class I nickel production. This resulted in a worldwide mining shift towards lower grade Class II nickel, thereby substantially reducing the percentage of nickel that is suitable for efficient battery production.

According to McKinsey’s 2017 report, Class I nickel supply suitable for battery production represents approximately half of the global supply of 2.1 million metric tons (mT) – although only 0.35 million mT are available to be processed into powder and briquettes that could be used to produce the nickel sulphate needed for batteries. For the full report, refer to The future of nickel: A Class Act by McKinsey.

NMC (nickel, manganese, cobalt) and NCA (nickel, cobalt, aluminum) chemistries are the most promising cathodes for lithium-ion electric vehicles and the type used by Tesla cars. These batteries rely on nickel sulphate (NiSO4), which in turn is made from highly refined Class I nickel to obtain their high energy density storage. In this chemistry, cobalt is used as a stabilizer whereas nickel stores the power.

Early NMC batteries utilized a 1-1-1 ratio of nickel, cobalt and manganese. As of 2018, advanced high performance batteries utilize a more powerful 6-2-2 chemistry, implying that 60% of the battery cathode is made up of nickel. In the next decade, the industry will transition to a new generation of performance, and lower cost per kWh, made possible by 8-1-1 batteries having an 80% nickel composition.

The 8-1-1 chemistry is expected to bring the cost per kWh below 100 USD, further increasing EV demand and battery volumes. This chemistry is not expected to meaningfully change over the next decade (upcoming solid-state batteries and graphene enhanced batteries will use a similar 8-1-1 cathode chemistry), and vast production facilities are now being constructed to produce batteries requiring massive amounts of Class I nickel.

The following slides were presented in 2017 by Vale, one of the largest mining conglomerates worldwide, on the expected impact of electric vehicle on nickel demand. 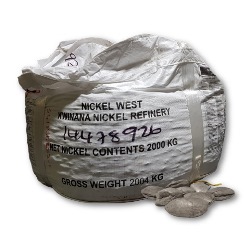 Obtain a loan in SGD/USD/EUR for up to 50% of your parcels’ value (or up to 62% for one month loan contracts) via Secured Peer-to-Peer Loans. The process is fast, easy and reliable.

For example, a 2 ton nickel parcel allows you to get a 26,500 USD loan starting February 15 at the following live interest rates:

Take delivery of your nickel parcels

You can arrange to withdraw your nickel parcels and have them shipped.