Two Singaporeans and a South African met in a Washington hotel room during the 1968 World Bank summit. The South African, careful to prevent their subsequent conversation from being eavesdropped on by some intelligence agency, said, “Before we talk, we must switch on the TV very loud.” The Singaporeans agreed and switched on the TV at full volume.

“We’re interested in buying gold,” one of the Singaporeans said.

A price was agreed upon between both parties and the South African gave instructions saying, “Ok, you send your man to Switzerland, we’ll deliver the gold to you in Switzerland and you pay us in Switzerland.”

Then he fished out a US one dollar note, cut it in two, and gave one half to the Singaporeans. “You keep this. I will keep the other half and my man will meet you in Switzerland.”

A few months later, emissaries of both parties met in Zurich, verified each other’s identity by matching the two pieces of the dollar note, and concluded the transaction for 100 tons of gold.

This clandestine transaction conducted under a cloak-and-dagger atmosphere was the story of Singapore’s first gold purchase.

The Singaporeans were Dr Goh Keng Swee, Singapore’s first finance minister and the widely-viewed “economic architect” of Singapore, and Ngiam Tong Dow, a pioneering civil servant who later served four decades at the highest levels in the city state’s bureaucracy. Their counterpart was the South African minister for finance, Dr Nicolaas Diederichs. 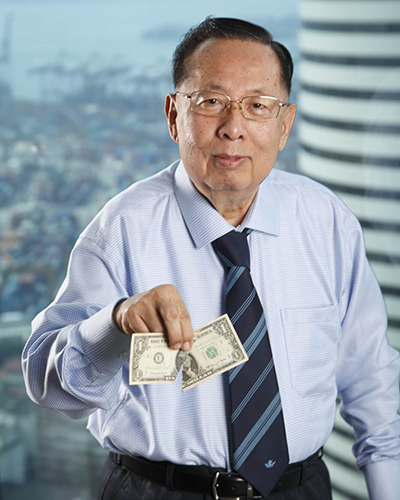 In his second stint as finance minister of a small nation independent only since 1965, Dr Goh made the decision to buy gold as part of the strategy to safeguard Singapore’s reserves. The devaluation of the sterling in November 1967 and upheavals in the global financial markets in the sixties also led him to change the currency composition of the reserves. The proportion of sterling and US dollars held in Singapore’s reserves were reduced in favor of the Deutsche mark, the Japanese yen, and the Swiss franc.

Despite assurances from Washington and London, Dr Goh was convinced that the Bretton Woods system would fracture. However, diversifying away from risky currencies to safer currencies was not sufficient to mitigate the incessant currency crises that were unfolding. He wanted also to buy gold because it was a highly liquid safe-haven asset that was also scarce. When held within Singapore, gold is no one’s liability and has no counterparty risk. It is the ultimate neutral asset that warrants trust and is also an insurance for fiat currencies.

It was also Dr Goh’s conclusion that the price of gold would have to rise given the chronic trade deficit of the US, Britain, and France. In his assessment, it was highly likely that the US dollar and sterling would not be able to maintain their parities against the currencies of countries with balance of payment surpluses. This was probably why he agreed to pay $40 although the gold price at that time was only $35 – a premium to buy at a fixed price instead of a floating market price.

This gold sale was also executed covertly given the US-led embargo on gold at that time. This meant that dollar purchases of gold could be blocked. Seeking to protect Singapore’s reserves, Dr Goh circumvented the embargo to buy gold.

100 tons of gold may seem small to the superpower nations but it was an astounding purchase for a small country like Singapore. Moreover, this decision was made in the late sixties when Singapore was not yet the fiscally-strong first-world nation it is today. At the time of writing, countries such as Australia, Indonesia, Denmark, Finland, and Canada have less than 100 tons in their official gold reserves, making Dr. Goh’s farseeing decision to buy 100 tons of gold five decades ago even more remarkable. Showcase in GIC office with the original torn US dollar note used
to authenticate the clandestine deal. (Source)

This move would later turn out to be astute as President Nixon closed the gold window in 1971, severing the US dollar’s link to gold sending the price of gold to an almost $200 record first in 1974 and then another record high of $850 in 1980.

More than five decades later, Singapore’s gold reserves made the news again recently when reports from the Monetary Authority of Singapore (MAS) showed the city-state increasing its gold reserves by about 20 percent in May and June of 2021. This largely under-the-radar move was the first increase in gold reserves since 2000.

While the MAS spokesman attributed the move as “a result of the continuous and ongoing efforts to ensure that the official foreign reserves portfolio remains well-diversified and resilient through economic and market conditions,” it is likely that the Singapore central bank is seeing inflationary pressures on the horizon similar to the seventies. The rise of commodity prices on the back of the Russia Ukraine war seven months later has only validated the central bank’s outlook.

The act of cutting a US dollar in two to facilitate Singapore’s gold purchase was symbolic of man’s innate long-standing preference for gold over a fiat currency. When trust in currencies falters and paper notes become worthless, people have turned to cutting and burning paper notes for warmth in winter, reselling worthless currency notes as souvenirs, and making cheap handicrafts out of them. This fate has never befallen gold and silver. A bag made out of devalued Venezuela bolivars.

We understand inherently that precious metals are safe-haven assets to run to in a crisis. They are the ultimate neutral asset to rebuild trust and they will always hold value due to their scarcity. History may not repeat itself exactly but it certainly rhymes. The time to destroy and use a dollar note as a mere pictorial puzzle is likely once again at hand.